Rooftop Gardens in the Rose City

Portland, Oregon is known for many things. Great beer, great coffee and great food among them! And hipsters. They're everywhere here. Everywhere.

But another thing the Rose City excels in is its innovation and dedication to the green lifestyle. In late 2015, we were able to add one more piece to the ever growing culture of Portland's "green-ness" when we hydro-seeded a rooftop garden on top of a new construction apartment building. The project itself was a unique one for us. Though we had used helicopters, marookas (machines that have tracks like a tank) and massive trucks for hydro-seeding, we had never used a crane to lift a full hydro-seeder before. This is how it worked: we had one hydro-seeder filled with 1,500 gallons of water next to a smaller, empty hydro-seeder. Using our fire hoses connected to the larger of the two, we would fill the empty hydro seeder with water while mixing in the mulch, fertilizer, seed and tackifier. When the smaller hydro-seeder was full, we would use straps to secure it to the arm of a crane, which would then lift the hydro-seeder four stories up to the top of the building, where we would then have one of our guys spray the material to cover the roof top. When the guys on the roof sprayed everything in the tank, the crane would swing back over, pick up the hydro-seeder, lower it to the ground, then wait for the guys on the ground to get it loaded so we could do the whole thing over again. This really was a very unique and fun project for us to work on, and we hope to do more like it in the future!

Rooftop Gardens in the Rose City

When the Volcano Erupted 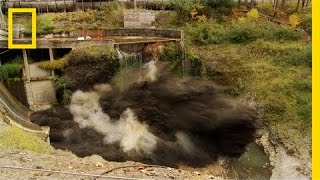